Recently we were in Seattle and were delighted to discover Lime bikes. These are shared bikes that you activate with an app from your phone. The really great thing about them was that you can find them and lock them up anywhere. The lock simply locks the back wheel. Each bike has a GPS tracker so you can find it with the Lime app on your phone (and presumably to stop theft). Best of all, most of these shared bikes are ebikes, so they are really great for transportation. We saw these bikes everywhere, and soon started riding them. By the end of our visit, we had figured out how to incorporate these ebikes into the transit system so as to get around Seattle really easily.

The first Lime bike we spotted was parked right on the street where we were staying, This particular one was a regular bike, not an ebike. Lime offers ebikes, regular bikes, and electric scooters in Seattle. Seeing this Lime bike parked there, we realized that users can simply drop them off anywhere.

We had not experienced this kind of bike share system before. For example, when we used Velib shared bikes in Paris, or Bixi bikes in Montreal, or Mobi bikes in Vancouver, or Melbourne Shared bikes, or CityCycles in Brisbane, or Citi Bikes in New York, they always had to be picked up from and returned to docking stations. As I wrote about in my post about cycling in Melbourne, this can sometimes be very challenging. I have it on very good authority that if you are tired and hungry and cannot find a docking station with empty spaces, there is a very real danger of getting into a fight with your spouse!

By contrast, you can find Lime bikes and ebikes pretty much anywhere. We saw them wherever we went!

Pretty much none of the other bike share systems listed above offer electric bikes as an option (unless they have upgraded since we visited). So, Seattle has added two important innovations to ensure that their shared bikes become a really useful part of people’s daily commuting choices:

We did try the regular bikes in Seattle, and found them to be pretty comfortable. But like many shared bikes, they are heavy. I don’t think I could take off on an uphill on one of them. However, the Lime ebikes were a huge help in getting around. The house we were staying was uphill from a light rail system, so we really needed the electric assistance to get home after a long day.

Lime Bikes Are All Over the USA!

Lime bikes can be found in many cities across the USA, as you can see in the map below. And you can vote to encourage your city to get some of these Lime bikes, by clicking here to go to the Lime site. Lime bikes are also in Paris, Berlin, Frankfurt, Madrid, Valencia, and Zurich.

Check Out a Lime Ebike Easily with the Lime App

So, we downloaded the Lime app to our phones. You can get it on the App store, and from Google Play. Of course, we had to add a credit card. Also, at this time, you can only check out one bike with the app, so Maggie and I both had to download the app. We battled a bit the first time we tried to check out a bike, and still don’t really know why. We think it was because the reception on our phones was not good in this area. However, the second time, and every time after that, it was a breeze. This video shows Maggie checking out a Lime bike, and also shows the first time she took one for a test ride.

First, you use the app to actually find a lime bike, using the app. The ebikes show up as circles with a lightning bolt on them.

Once you find a bike, you simply open the app on your phone, and click on the SCAN TO RIDE link. Then you hold your phone up and use it to scan the bar code on the bike’s handlebars. You hear a musical chord as the lock clamping the rear wheel unlocks and retracts. You adjust your saddle height (if necessary, and it usually is), and off you go. Oh, and a nice little touch, you can attach your smart phone to your handlebars. This is especially useful if you are using Google Maps to navigate.

Once you are done riding, you just have to lock the back wheel by pushing the red lever. As soon as the lock engages you hear a noise, and almost immediately you get a notification on your smart phone that you have returned the bike. Every time it then asks you how your ride was, which can get a bit annoying, but is hardly a deal breaker. It does give you a chance to report any problems with the bike, which is important for the sake of other users.

After that, you can review your history on the bike, including how far you went, what it cost, how much carbon you saved with your green transportation choice, and how many calories you burned. 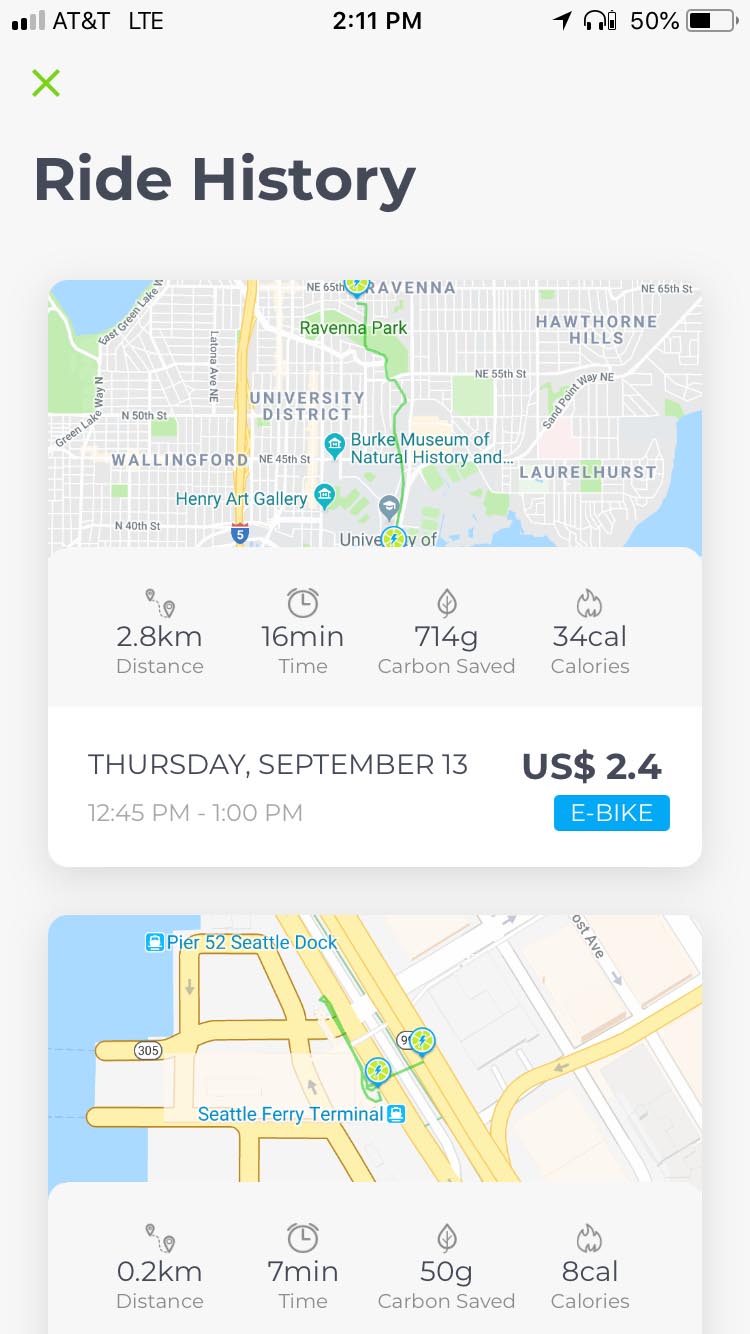 Of course, the number of calories is merely a rough estimate, as the app does not know how much you weigh. I have a post here about how many calories you actually burn on an ebike.

Performance of the Lime Ebikes

I have no idea how they keep these Lime ebikes charged and working. Although I saw on their website that you can make money by charging up the bikes for Lime. However, from the user perspective, every time we checked out a Lime ebike, it was charged and ready to go. A couple of the times the brakes were less than impressive, or there was a rattle somewhere, but I am very fussy, and that is probably to be expected.

In terms of power assist, the level of assistance was roughly equivalent to the lowest level of assistance on a high-quality ebike, such as Maggie’s Haibike SDURO HardSeven (reviewed here). It was just enough to make cycling easy, while hills were possible, but tiring. We were very out of breath at the end of a fairly long uphill. Still, it was a hill that we would not even have attempted with a regular bike.

Problems with the Lime Bikes System

We thought we were really being pretty savvy the first day we used the Lime bikes as part of our journey to downtown Seattle. We found a couple of ebikes within two blocks of our house. An enjoyable two-mile ride got us to the light rail system, and 20 minutes later we were downtown. Coming back hours later, we were tired. But still pleased with ourselves, as we imagined getting home just as efficiently. When we got off the train, we were a bit crestfallen to see no Lime bikes of any kind at the station. Probably because it was rush hour. However, the app showed two ebikes quite close, so off we went to get them.

Trouble was, when we got to them, only one of the two bikes was available – the other one could not be checked out, as it needed maintenance. Our question is this: why show a bike on the app if it is not available?

So basically Maggie got a bike, and I got to walk a mile or so more. To make it worse, the first walk had taken me further from where there really was an available bike, so I had to double back. Eventually I found a regular Lime bike, and rode it for about half a mile more before I saw a Lime ebike, and switched bikes. After that we got home quickly, if a little stressed. But it sure was nice being able to ride the bikes all the way to our home before parking them on the sidewalk in front!

The other little problem was that I could not figure out from anywhere online how much it would cost to take out a ebike. I knew it would cost one dollar to check it out, but after that, it just said it would charge me per mile. But how much per mile? Anyway, once I had my first ride, I could see the charges on my phone, and they were very reasonable. And of course, I could probably have found it out from phoning customer service. I phoned them once, and I got through quickly and got a helpful and polite person on the line.

Bottom Line on the Lime Bikes

Lime bikes are a great addition to any transit system, enabling you to close those annoying gaps. For example, we could have driven a car to the light rail station – but during the week, there is no parking there. We could also have walked, but a two mile walk is going to add way too much time onto your trip. An ebike is the perfect solution to fill that gap. We also found in downtown Seattle that the ebikes were a great way to get to a light rail station, rather than trying to get there with a bus, or walking.

Of course, they are not perfect, and the very thing that makes them so convenient – i.e. the ability to pick them up or drop them off anywhere – can also paradoxically make them inconvenient, when you cannot find one, or the app gets you to trudge to one that is not available. Still, these are relatively minor gripes, and no doubt the system will improve over time.